The Prudden Conservation Easement was donated to the Land Trust in 1999 by Betsy and Peter Prudden.  They both were  founding members of the Trust.  The Prudden’s entire property totaled approximately 99 acres.  Of those 99 acres, 92 acres were donated to the Trust (two private house lots were not included).  The conservation easement stipulates that the 92 acres be kept as open space, with multiple land management objectives including wildlife management, agriculture, and proper forest management.  Unlike properties owned by the Trust, public access is NOT allowed anywhere on this privately-owned property.

The conservation easement is contained in two separate parcels bordering Leadmine Brook Rd. on the south, and split east and west by North Rd:

1-The easement section to the east of North Rd. is approximately 56 acres.  It contains woodlands, four hay fields, and encloses an unrestricted-use, 5-acre house lot.  Two acres of the area’s woodland was abruptly converted to pasture after an illegal clearcut occurred in 2017 (see below).

2-The easement section to the west of North Rd. is approximately 36 acres.  It contains woodlands and “Hoopers Swamp”, which straddles the headwaters of Leadmine Brook.  It encloses an unrestricted-use, 2-acre house lot.

There have issues of concern:  In 2004, the first new land owner of the eastern easement section made plans to develop the 56 acres into numerous house lots.  The Trust had to hire legal help to squash his development plans.  In Oct. 2017, 2 acres of the 56-acre eastern easement was illegally clearcut.

The illegal clearcut presented a major challenge for the Trust.  For 20 years, the Trust has been diligent in its stewardship of the Prudden easement and performed formal inspections each year to ensure that the required land protections were being adhered to.  During those years, the land remained protected, provided environmental benefits, and added to the rural character of our town.  Needless to say, it was a shock to find that a large forested area of our eastern easement had been completely leveled by heavy land clearing equipment within a single day (Oct. 19, 2017) .  All of this was done without the knowledge of the land owner or the Land Trust. 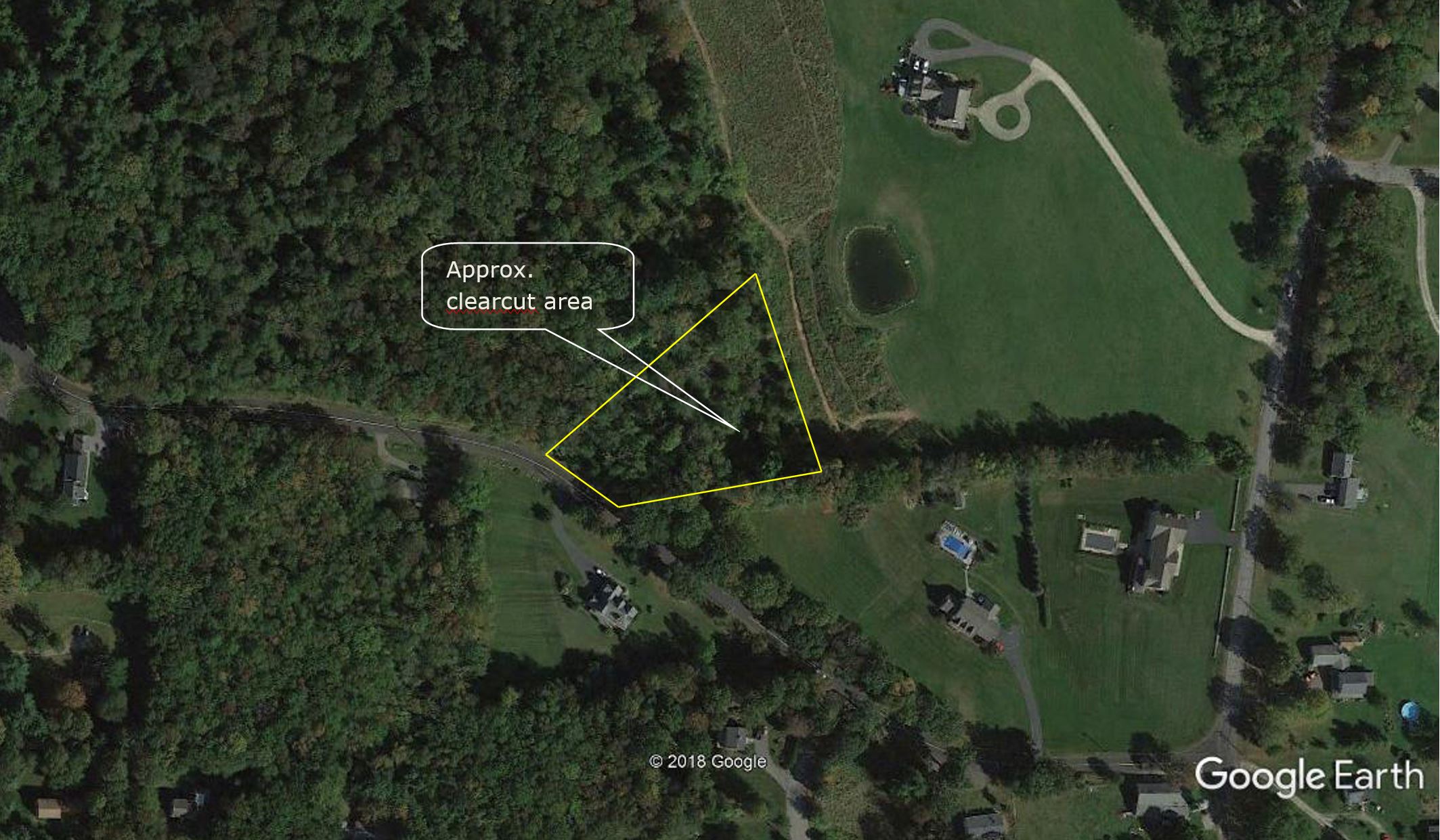 Location of the forested area prior to clearcuting. 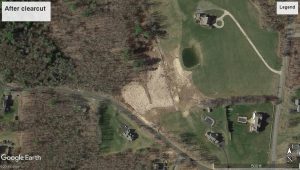 The Trust’s Board of Directors convened immediately after the event to determine a course of action.  We understood the importance of this property and were committed to restoring the area.  Our first steps were to hire a surveyor and to consult with a certified forester to begin the process of defining an approach to remediation.

The surveyor determined the clearcut to be even larger (~2 acres) than first estimated (~1 acre).  Thus, work to restore the area would be even more difficult than originally thought.  The certified forester indicated that reforestation was possible, but that long-term efforts would be necessary to prevent invasives (multiflora rose and bittersweet vines) from overwhelming any trees that were planted or had sprouted from stumps.  Given that the Trust does not actually own the land, it could not make a long-term commitment for controlling invasives through the use of herbicides or continual brush cutting.   Because of the invasive plants, the clearcut area would likely turn into old field habitat.  Although old field habitat (generally a thicket of pricker bushes)  may be good for cottontail rabbits and song birds, it would be unsightly and not conform to the rural character of the area.  Reforestation was given strong consideration by the Trust’s Board of Directors, since the easement requirements led it in that direction.  However, reforestation appeared problematic given the long-term management needs.

The Trust then considered other options, including conversion to agricultural use, as agriculture is allowed under the conservation easement.  Possible agricultural conversions included an apple orchard, a vineyard, and a hay field.  Also considered was a pollinator meadow, which would provide environmental benefits, especially for the threatened Monarch butterfly.   All of these uses would require long term management and would pose unreasonable burdens on current and future land owners.  As with reforestation, these options did not seem feasible.

The Land Trust then met with the land owner and the person who did the clearcutting.  The person who did the clearcutting acknowledged that he made a serious mistake and indicated that he would commit to renovating the land at his cost.  Reforestation and the agricultural/environmental options were discussed, but dismissed as not being feasible.  Discussions then led to the option of creating and maintaining the area as a pasture.  It should be noted that the clearcut area had previously been a pasture into the 1960s, and that the Pruddens occasionally had cows there.

Some specific procedures needed to be followed in order to create a pasture.  The owner of the land clearing business agreed to use his equipment and staff to remove all wood chips and stumps, then grade the soil and plant seed.  He also agreed to plant staggered rows of large evergreens along the road and a large maple tree or small cluster of hardwood trees in the center of the pasture.  Both the land owner and the owner of the land clearing business  agreed to share mowing responsibilities.  While the pasture option would not replace the environmental benefits of the previous forest, at least it would renovate the land and retain the rural character of the area.  Eventually, more trees could be planted to create a semblance of woodland.  The Land Trust recognized that none of the options were ideal, but a maintained pasture seemed to be the best possible option.  All parties agreed to proceed along those lines.

Time Line:  The next spring (May 2018), no sprouting of trees was observed.  Multiflora rose was the only woody vegetation growing up through the thick covering of wood chips.  As suspected, reforestation under these conditions would be difficult to achieve. 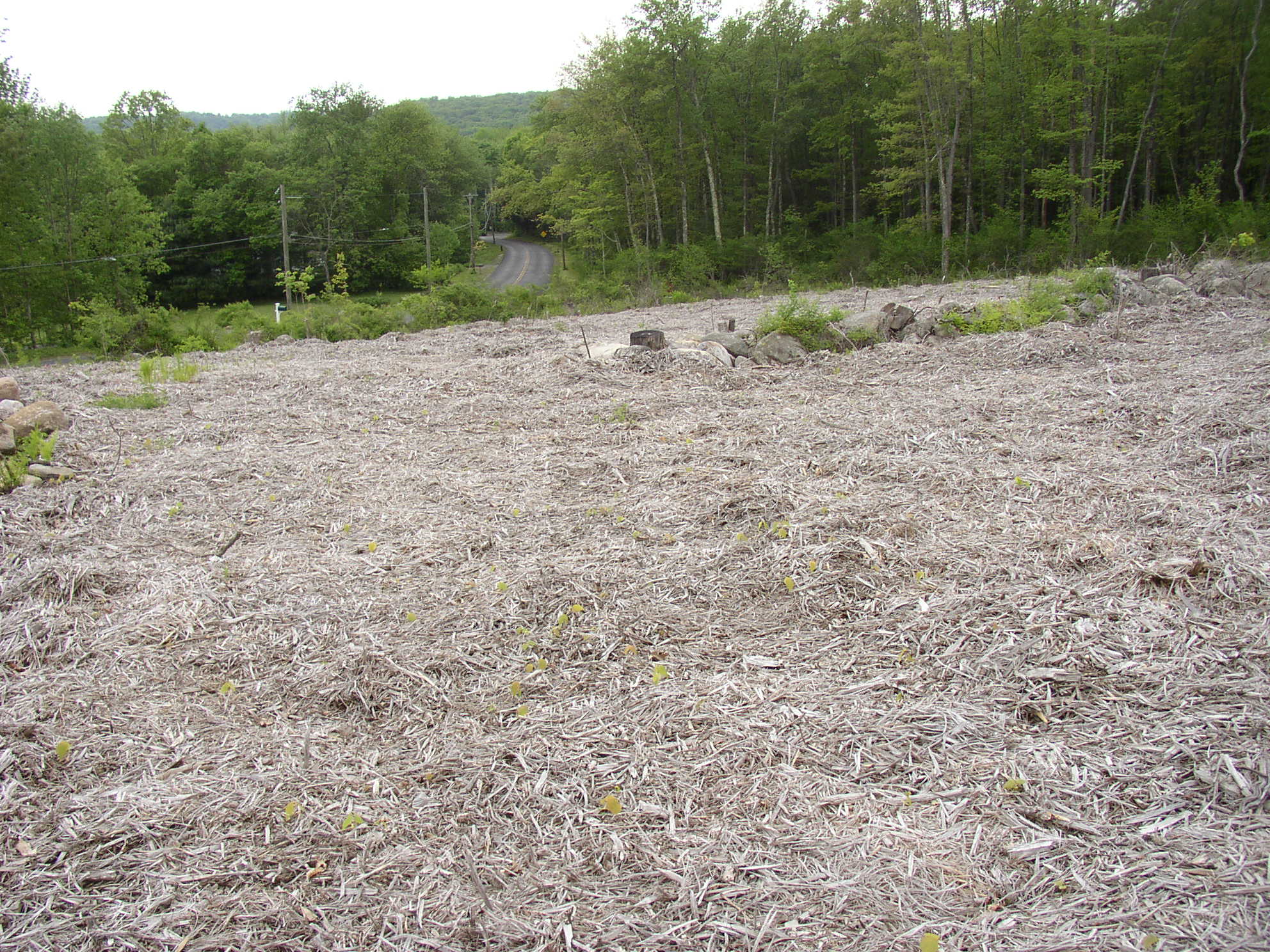 Clearcut blanketed in wood chips, with no small trees sprouting from buried stumps (photo: May 26, 2018).

Work to renovate the clearcut began in May. 2018.  Clearing started at the top of the clearcut, where the soil was drier and less likely to erode.  Wood chips and stumps were removed in an approximate 50-swath along the entire upper (north) border of the clearcut. 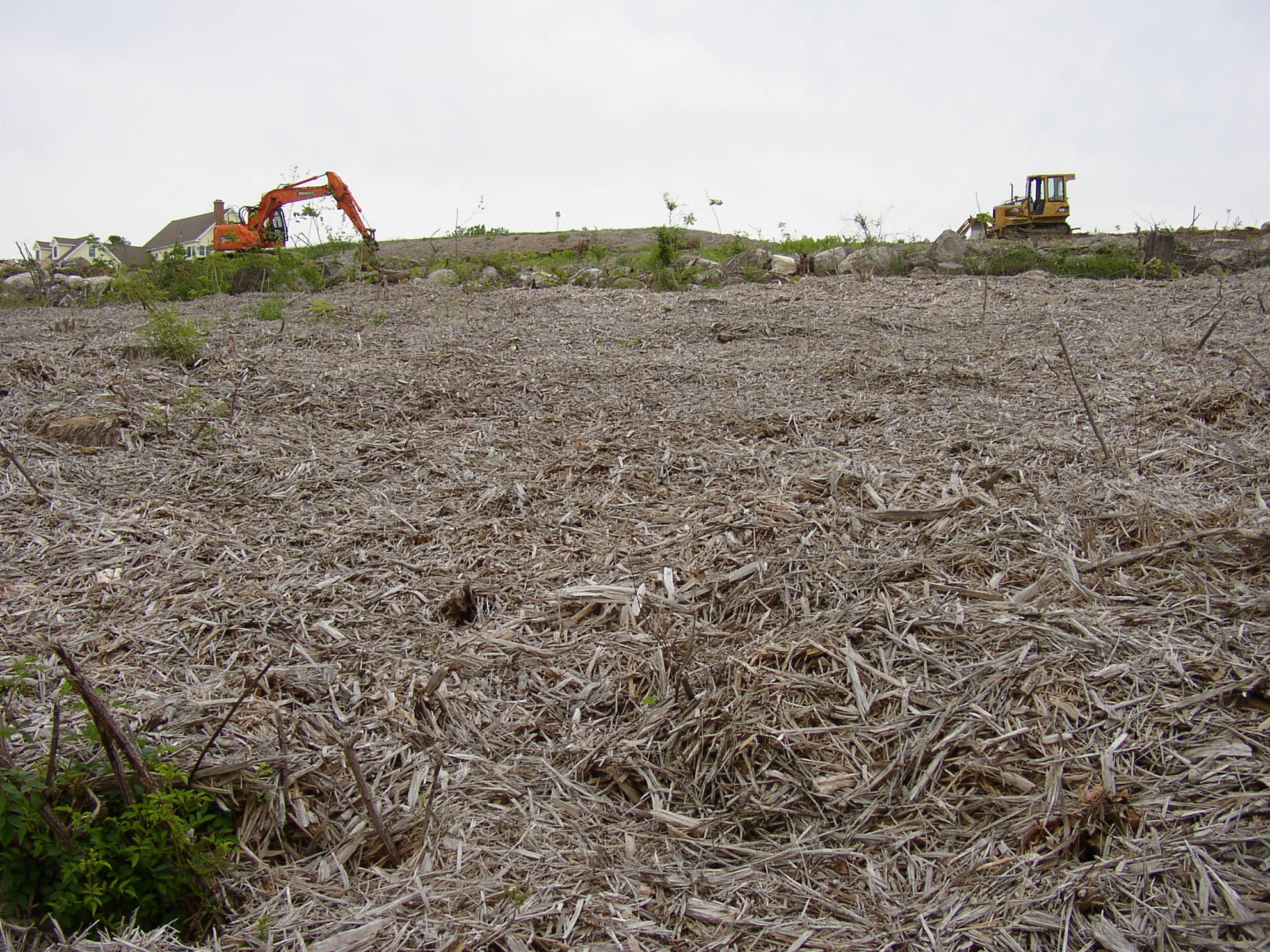 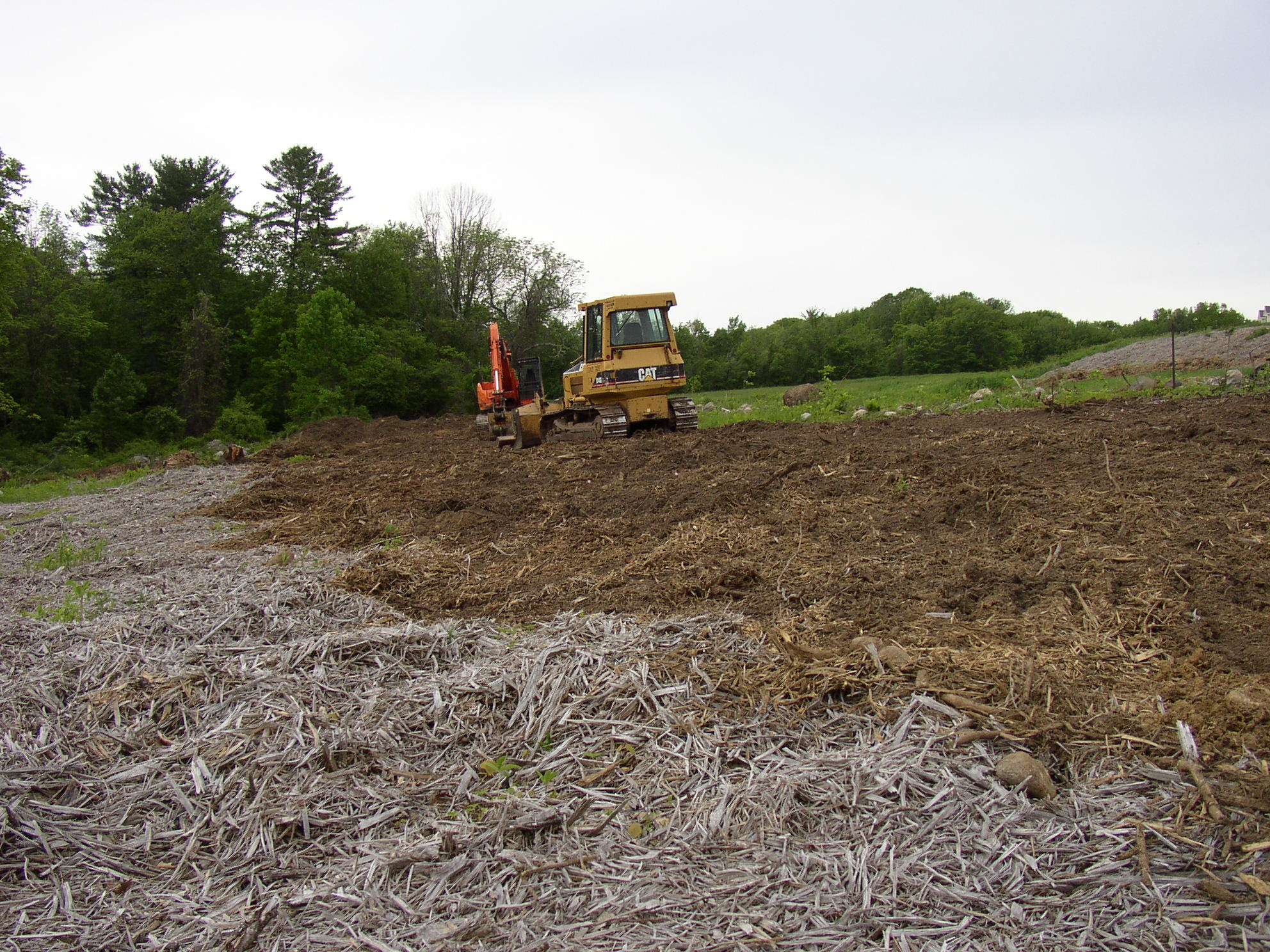 By June 4, wood chips and stumps within the entire clearcut area had been removed.  By June 9, the entire area was seeded.  At this point, the owner of the land clearing business completed this phase of work as he had agreed to do with the Land Trust. 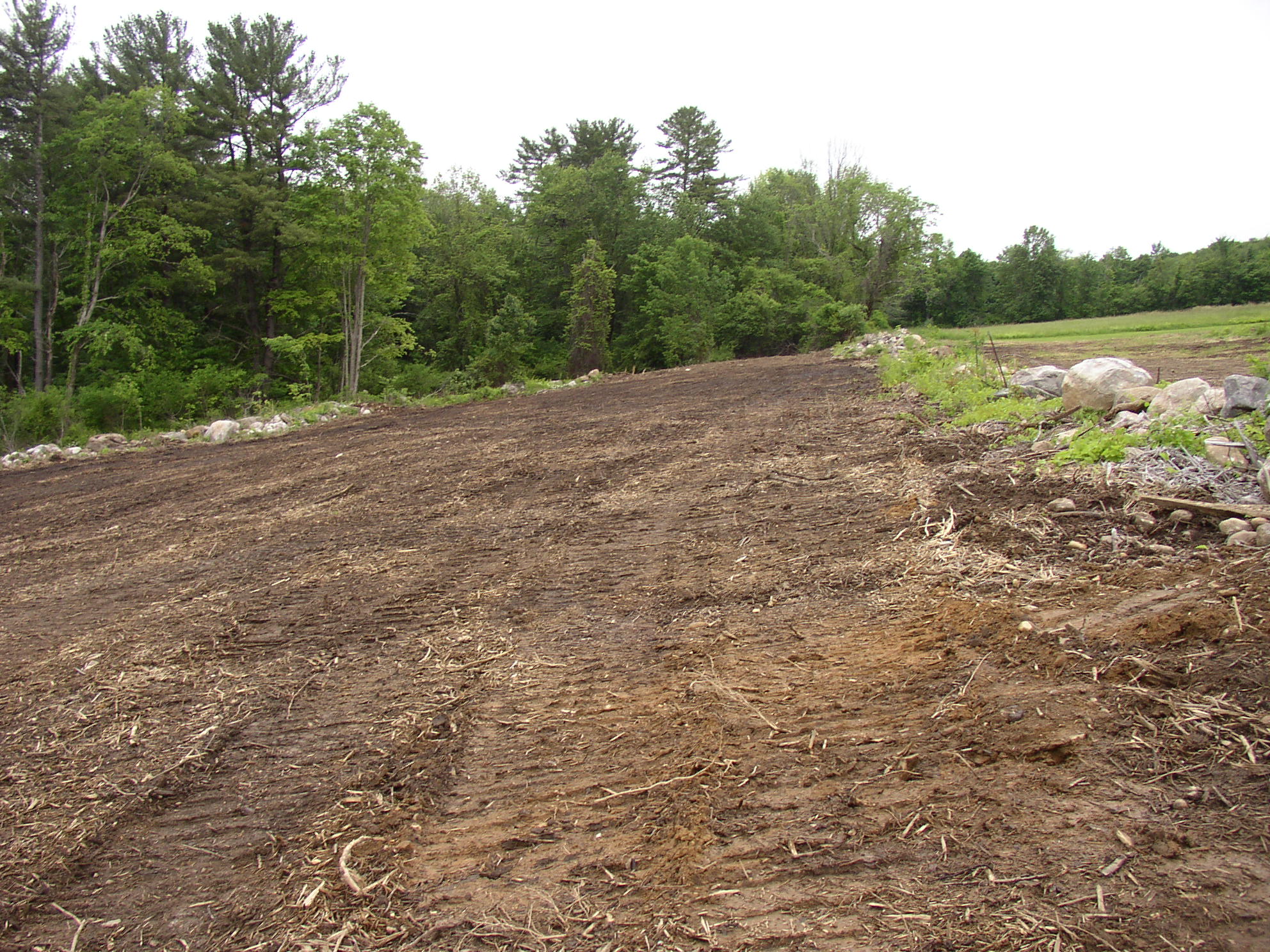 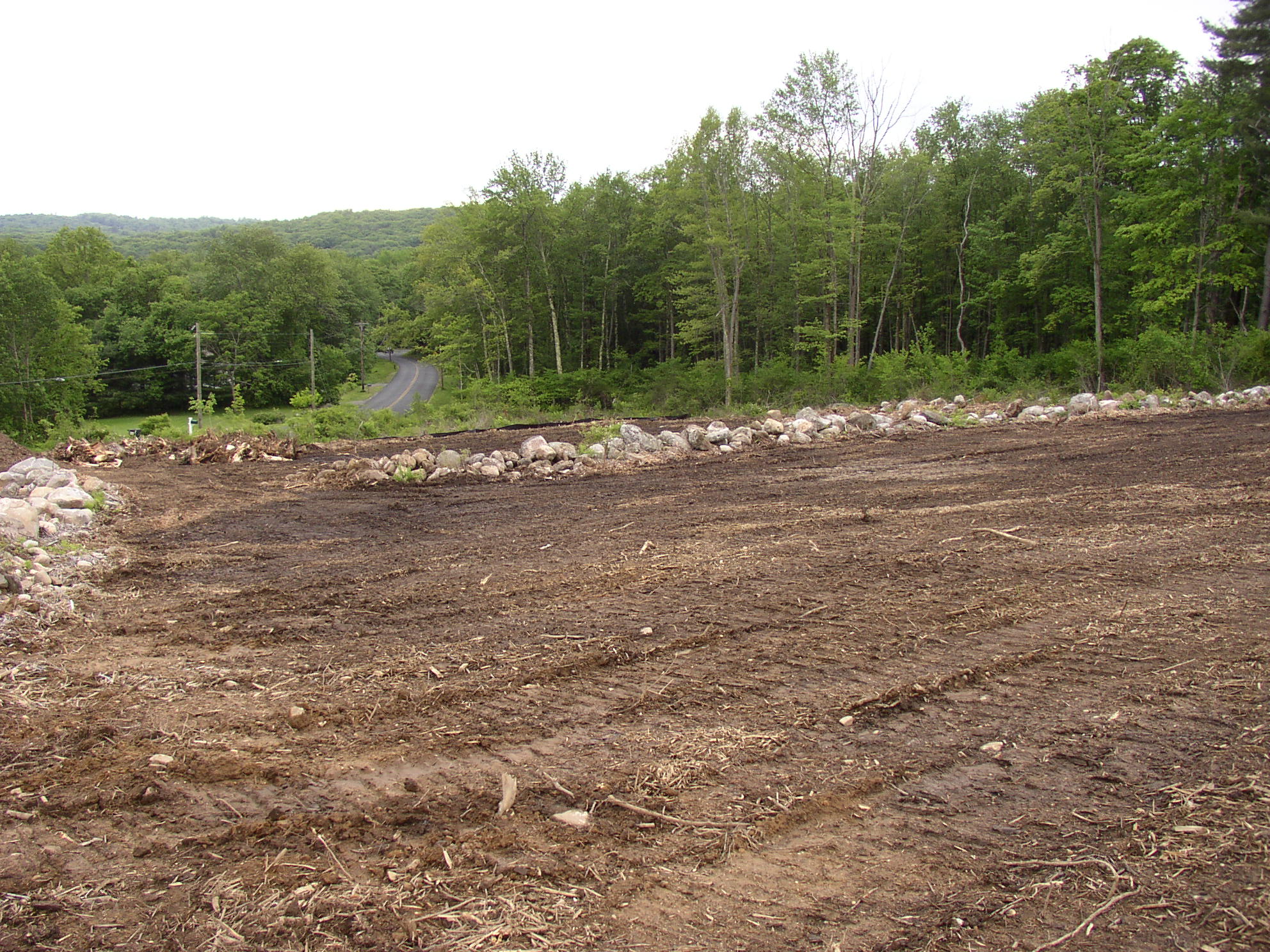 The entire area, above and below the partial rock wall, had been cleared of wood chips, stumps and was graded as of June 4, 2018.  Note the silt fence at the lower right of cleared area and the pile of stumps in the lower left.  Photo taken at the top NE corner of clearcut.

By Sept. 2018, the area has grown into a rough pasture.  Some areas would need more grading and reseeding, but no multiflora rose or bittersweet vines were present.  The area had taken on a more aesthetic appearance.  Piles of chips, stumps, boulders piled next to the road would still needed to be removed. 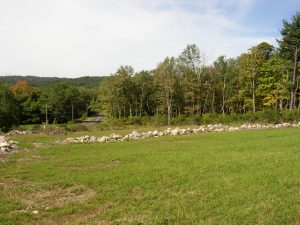 On Nov. 15, 2018 a pile of mulch that had been deposited on a neighboring property was graded into a swale that  resolved drainage issues onto Leadmine Brook Rd.  The town highway supervisor had recommended drainage improvements, and was satisfied with the completed work.   The stumps piled along the road were removed, and the pile of boulders were moved from roadside to existing stone walls.   The area looked  better with the piles having been taken care of. 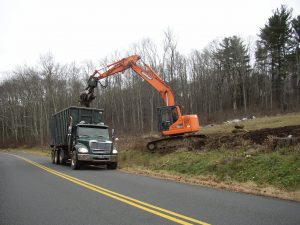 Stumps piled alongside the road were removed from the clearcut site.

On March 13, 2019, some additional improvements were made, including regrading and removing large boulders from the lower pasture, adding some top soil to an area of the lower pasture, and adding a row of fresh bark mulch at the bottom edge of the lower pasture to contain runoff.  Plans for spring 2019 had called for large hemlocks to be planted along the road, and a group of several hardwoods to be planted in the middle of the pasture.  However, those plantings could not be completed due to heavy spring rains.  Those rains also caused some erosion where regrading had previously occurred in March.  In July, the eroded area had a compost/soil mixture blown-in, which was then followed by spreading a layer of topsoil in September.  As of November 2019, the pasture was fully restored, but large evergreens still need to be planted along the roadside.

In January 2020, the Trust met with the owner of the property and the person who did the clearcut to discuss progress and future plans.   Discussion led to agreement that the new pasture conformed to the rural character of the area, but that large hemlocks along the road would not likely be appropriate.  Large hardwood trees planted along all the stone walls might might be more typical of the surrounding area and more visually appealing.  Discussions will continue.  In May 2020, land trust directors met with the person who clearcut and staked out locations where the hardwoods would be planted.  As agreed, four maple trees (2″ dia. trunk) were planted along Leadmine Brook Rd. in October.